The description of the RAN in the previous chapter focused on functionality, but was mostly silent about the RAN’s internals structure. We now focus in on some of the internal details, and in doing so, explain how the RAN is being transformed in 5G. This involves first describing the stages in the packet processing pipeline, and then showing how these stages can be distributed and implemented.

Figure 18 shows the packet processing stages implemented by the base station. These stages are specified by the 3GPP standard. Note that the figure depicts the base station as a pipeline (running left-to-right) but it is equally valid to view it as a protocol stack (as is typically done in official 3GPP documents). Also note that (for now) we are agnostic as to how these stages are implemented, but since we are ultimately heading towards a cloud-based implementation, you can think of each as corresponding to a microservice (if that is helpful).

The key stages are as follows:

The last two stages in Figure 18 (D/A conversion and the RF front-end) are beyond the scope of this book.

While it is simplest to view the stages in Figure 18 as a pure left-to-right pipeline, in practice the Scheduler running in the MAC stage implements the “main loop” for outbound traffic, reading data from the upstream RLC and scheduling transmissions to the downstream PHY. In particular, since the Scheduler determines the number of bytes to transmit to a given UE during each time period (based on all the factors outlined in an earlier chapter), it must request (get) a segment of that length from the upstream queue. In practice, the size of the segment that can be transmitted on behalf of a single UE during a single scheduling interval can range from a few bytes to an entire IP packet.

The next step is understanding how the functionality outlined above is partitioned between physical elements, and hence, “split” across centralized and distributed locations. Although the 3GPP standard allows for multiple split-points, the partition shown in Figure 19 is the one being actively pursued by the operator-led O-RAN (Open RAN) Alliance. It is the split we adopt throughout the rest of this book.

This results in a RAN-wide configuration similar to that shown in Figure 20, where a single Central Unit (CU) running in the cloud serves multiple Distributed Units (DUs), each of which in turn serves multiple Radio Units (RUs). Critically, the RRC (centralized in the CU) is responsible for only near-real time configuration and control decision making, while the Scheduler that is part of the MAC stage is responsible for all real-time scheduling decisions.

Figure 20. Split-RAN hierarchy, with one CU serving multiple DUs, each of which serves multiple RUs.

Clearly, a DU needs to be “near” (within 1ms) the RUs it manages since the MAC schedules the radio in real-time. One familiar configuration is to co-locate a DU and an RU in a cell tower. But when an RU corresponds to a small cell, many of which might be spread across a modestly sized geographic area (e.g., a mall, campus, or factory), then a single DU would likely service multiple RUs. The use of mmWave in 5G is likely to make this later configuration all the more common.

Also note that the split-RAN changes the nature of the Backhaul Network, which in 4G connected the base stations (eNBs) back to the Mobile Core. With the split-RAN there are multiple connections, which are officially labelled as follows:

As we will see in a later chapter, one possible deployment co-locates the CU and Mobile Core in the same cluster, meaning the backhaul is implemented in the cluster switching fabric. In such a configuration, the midhaul then effectively serves the same purpose as the original backhaul, and the fronthaul is constrained by the predictable/low-latency requirements of the MAC stage’s real-time scheduler.

Finally, we describe how the RAN is implemented according to SDN principles, resulting in an SD-RAN. The key architectural insight is shown in Figure 21, where the RRC from Figure 18 is partitioned into two sub-components: the one on the left provides a 3GPP-compliant way for the RAN to interface to the Mobile Core’s control plane, while the latter opens a new programmatic API for exerting software-based control over the pipeline that implements the RAN user plane. To be more specific, the left sub-component simply forwards control packets between the Mobile Core and the PDCP, providing a path over which the Mobile Core can communicate with the UE for control purposes, whereas the right sub-component implements the core of the RCC’s control functionality.

Figure 21. RRC disaggregated into a Mobile Core facing control plane component and a Near Real-Time Controller.

Although not shown in Figure 21, keep in mind (from Figure 19) that all constituent parts of the RRC, plus the PDCP, form the CU.

Completing the picture, Figure 22 shows the Near-RT RAN Controller implemented as a traditional SDN Controller hosting a set of SDN control apps. The Near Real-Time Controller maintains a RAN Network Information Base (R-NIB) that includes time-averaged CQI values and other per-session state (e.g., GTP tunnel IDs, QCI values for the type of traffic), while the MAC (as part of the DU) maintains the instantaneous CQI values required by the real-time scheduler. Specifically, the R-NIB includes the following state: 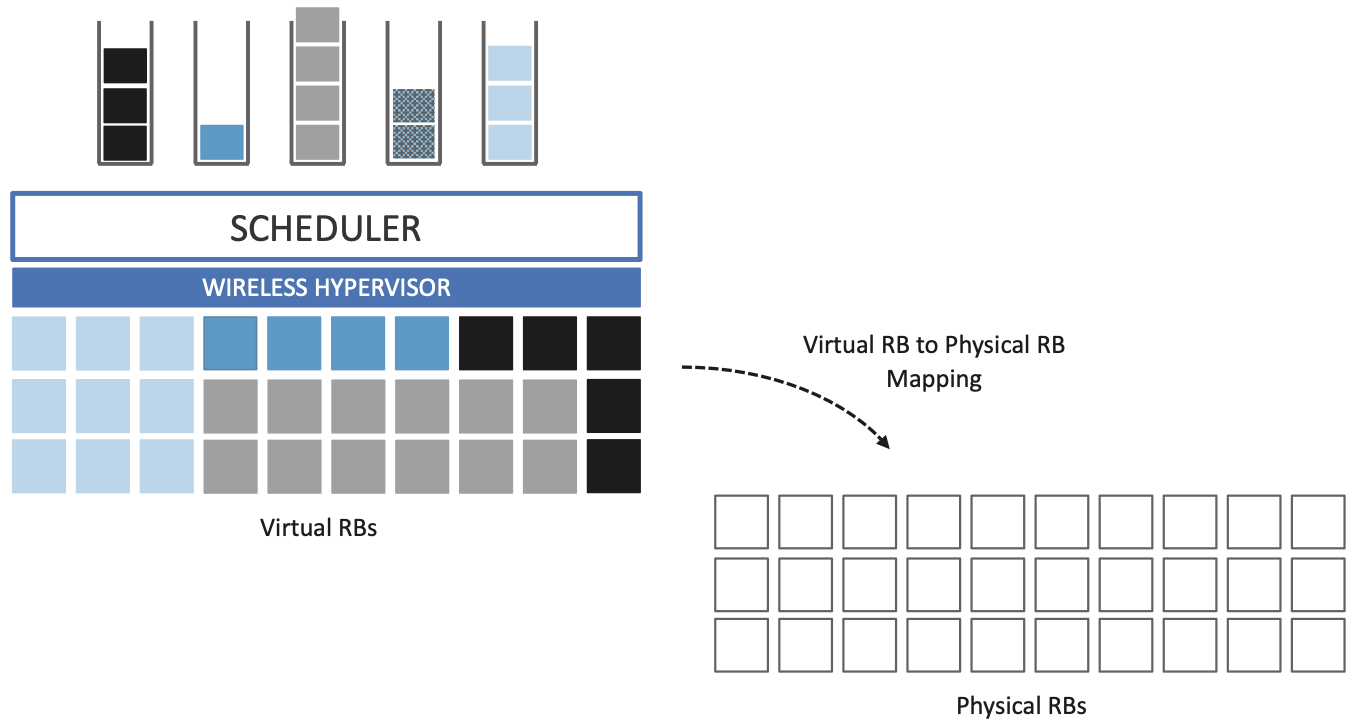 The example Control Apps in Figure 22 include a range of possibilities, but is not intended to be an exhaustive list. The right-most example, RAN Slicing, is the most ambitious in that it introduces a new capability: Virtualizing the RAN. It is also an idea that has been implemented, which we describe in more detail in the next chapter.

The next three (RF Configuration, Semi-Persistent Scheduling, Cipher Key Assignment) are examples of configuration-oriented applications. They provide a programmatic way to manage seldom-changing configuration state, thereby enabling zero-touch operations. Coming up with meaningful policies (perhaps driven by analytics) is likely to be an avenue for innovation in the future.

The left-most four example Control Applications are the sweet spot for SDN. These functions—Link Aggregation Control, Interference Management, Load Balancing, and Handover Control—are currently implemented by individual base stations with only local visibility, but they have global consequenes. The SDN approach is to collect the available input data centrally, make a globally optimal decision, and then push the respective control parametes back to the base stations for execution. Realizing this value in the RAN is still a work-in-progress, but evidence using the same approach to optimize wide-are networks is compelling.

For an example of how SDN principles have been successfully applied to a production network, we recommend B4: Experience with a Globally-Deployed Software Defined WAN, SICOMM 2013.