The steps we’ve taken in the previous chapters to virtualize, disaggregate, optimize, distribute, and slice the cellular network not only help us understand the inner-workings of 5G, but they are also necessary to reduce the entirety of the 5G cellular network to practice. The goal is an implementation, which by definition, forces us to make specific engineering choices. This chapter describes one set of engineering choices that results in a running system. It should be interpreted as an exemplar, for the sake of completeness, but not the only possibility.

The system we describe is called CORD, which you will recall from the Introduction is an acronym (Central Office Re-architected as a Datacenter). More concretely, CORD is a blueprint for building a 5G deployment from commodity hardware and a collection of open source software components. We call this hardware/software combination a CORD POD, where the idea is to deploy a POD at each edge site that is part of a cellular network. The following describes CORD in terms of a set of engineering decisions. It is not a substitute for detailed documentation for installing, developing, and operating CORD. Also keep in mind that even though CORD includes “Central Office” in its name, a CORD POD is a general design, and not strictly limited to being deployed in a conventional Central Office.

To learn how to install, operate, and contribute to the CORD open source software platform, see the CORD Guide, where you will find information about both the fiber (SEBA) and cellular (COMAC) profiles.

Before getting into the specifics, it is important to understand that CORD is a work-in-progress, with a sizable open source community contributing to its code base. Many of the components are quite mature, and currently running in operator trials and production networks. Others (largely corresponding to the advanced capabilities described in the previous chapter) are prototypes that run in “demonstration mode,” but are not yet complete enough to be included in official releases. Also, as outlined in the earlier discussion on deployment options, CORD starts with a production-quality EPC that is being incrementally evolved into its 5G counterpart. (This chapter uses the EPC-specific components for illustrative purposes.)

Figure 31 gives a schematic overview of a CORD POD. It connects downstream to a set of DUs (and associated RUs), and upstream to the rest of the Internet. Internally, it includes a set of commodity servers (the figure shows four racks of three servers each, but the design accommodates anywhere from a partial rack to 16 racks) and a set of white-box switches arranged in a leaf-spine topology (the figure shows two leaves and two spine switches, but the design allows anywhere from a single switch to two leaf switches per rack and as many spine switches as necessary to provide sufficient east-to-west bandwidth).

With respect to software, Figure 31 shows a combination of RAN (red) and Mobile Core (blue) components, plus the modules that define the CORD platform (orange). We describe the platform components later in this chapter, but you can think of them as collectively implementing a multi-tenant cloud on top of which many different scalable services can run. The RAN and Mobile Core are two such tenants. The CORD platform can also host other edge services (which is one reason CORD is built using cloud technology in the first place), but exactly what other edge services might run on a given CORD POD is a question we do not try to answer in this book.

The RAN and Core related components are ones we’ve described in earlier chapters. They include the Control and User planes of the CU and Mobile Core, respectively, where to simplify the diagram, we show the SGW and PGW merged into a single S/PGW. One other detail that deserves closer attention is the RAN Control component included in the CU Control Plane. This is the near real-time controller introduced in Section 4.3, which means a CORD POD includes two SDN Controllers: this one control the RAN and ONOS shown in Figure 31 controls the fabric. (We actually use a second instantiation of ONOS for the former, but that’s an implementation detail.)

One aspect of Figure 31 that requires further elaboration is how each of the RAN and Mobile Core components are actually realized. Specifically, there are three different manifestations of the functional components implied by the Figure: (1) the data plane layer of the CU-U and S/PGW-U are realized as P4 programs loaded into the programmable switches; (2) the control plane layer of the CU-U and S/PGW-U (as well as the Trellis platform module) are realized as control applications loaded onto the ONOS Network OS; and (3) the remaining components are realized as Kubernetes-managed microservices. (Kubernetes is implied, but not shown in the figure.)

To expand on this idea, Figure 32 gives an alternative view of a CORD POD, abstracting away the details of what services it hosts, and focusing instead on how those services are instantiated on the POD. In this figure, all the functionality instantiated onto the POD runs as a combination of Kubernetes-based microservices and ONOS-based control applications.

Figure 32. Alternative view of CORD, with a CI/CD toolchain managing the platform and set of services implemented by a combination of ONOS-based control apps and Kubernetes-based microservices.

When abstracted in this way, we can view a POD as including three major subsystems:

Although beyond the scope of this book, the CI/CD toolchain uses standard DevOps tools to bootstrap software onto the cluster of servers and switches, and rollout/rollback individual microservices and control applications. It also auto-generates the Northbound Interface (NBI) that operators use to manage the POD, based on a declarative specification of the Profile the POD is configured to support. This NBI is sufficiently complete to operate a CORD POD in a production environment.

We now return to the three platform-related components shown in Figure 31 and Figure 32. Each is a substantial open source component in its own right, but for our purposes, it is enough to understand the role they play in supporting a 5G-based profile of CORD.

Stratum (running on each switch) and ONOS (running off-switch and managing a network of switches) communicate using the following interfaces:

Trellis, as an SDN control application running on top of ONOS, controls packet forwarding across the switching fabric internal to a CORD POD (i.e., within a single site). But Trellis can also be extended across multiple sites deeper into the network using multiple stages of spines, as shown in Figure 33. This means Trellis has the potential to play a role in implementing the backhaul and midhaul network for the RAN, or alternatively, extending the RAN into customer premises (denoted “On Site” in the figure). 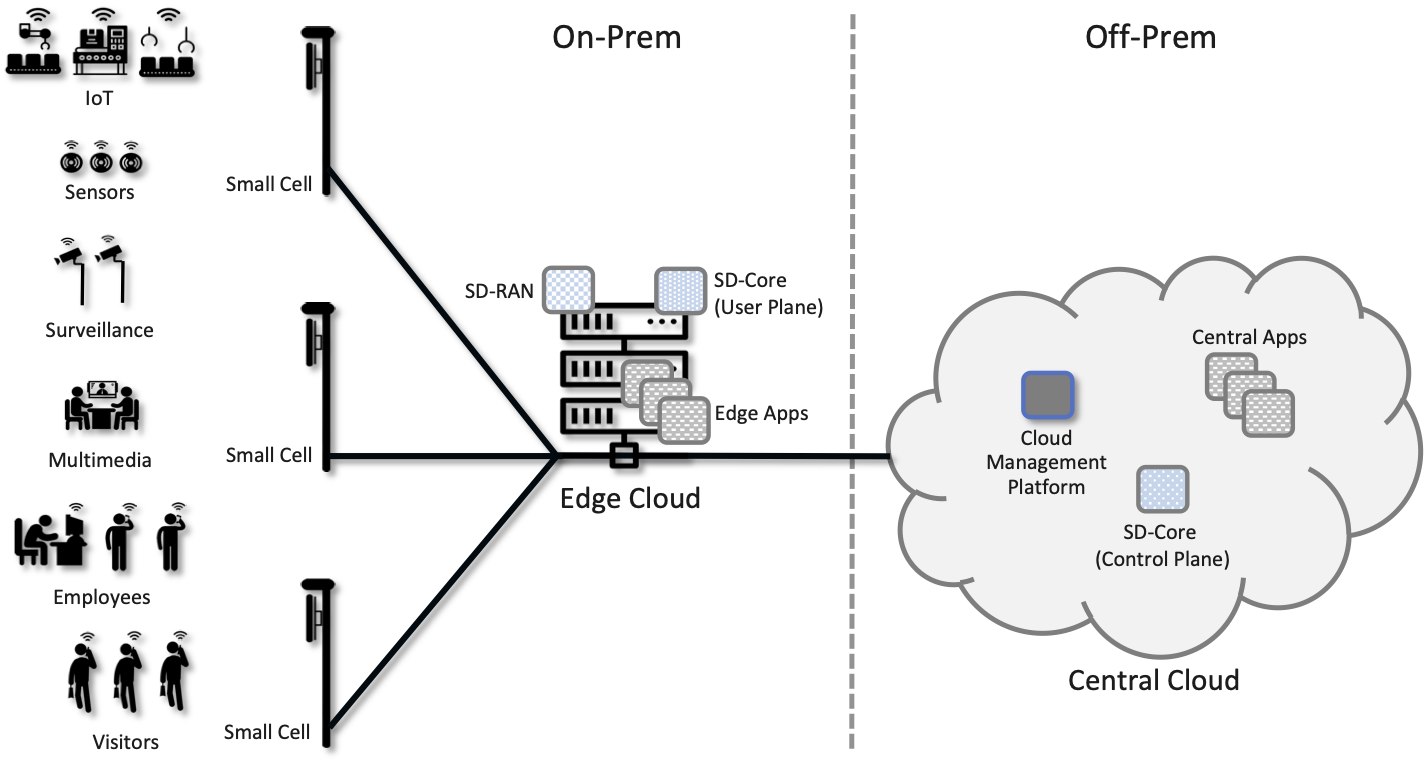